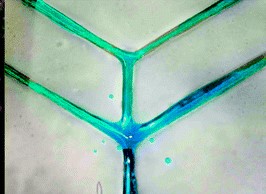 Once superhydrophobic surfaces have been manufactured, we can then think about what we can do with the surfaces, both to further understand the science behind hydrophobicity and to think about potential applications.

When a water droplet impacts on a solid surface, we expect the drop to splash. However, when impacting on a ‘bed of nails‘, droplets completely rebound without any splashing.

When a water droplet rests on a microscopic ‘bed of nails’ surface, it will initially form a ball with a high contact angle. However, as the droplet evaporates, the curvature becomes greater, which leads to a greater pressure inside the droplet. This leads to a sudden transition to a state in which the water penetrates between the ‘nails’.

If the roughness changes across a surface, the water-repellency will also change. This leads to interesting motion of droplets on the surface.

A jet of water directed onto a funnel with a superhydrophobic coating goes round many times more than one without a coating.

Droplets can be rolled across an artificial leaf and collected in rivulets, directing water to the stem base.

While the above example used variation in surface roughness to control superhydrophobicity, hydrophobicity can also be controlled by altering external factors such as temperature. A water droplet can be switched from resting on a foam surface to being absorbed into the foam by heating it up. This could potentially be used as an indicator that the temperature had exceeded a critical level at some time in the past, which is of relevance in food storage for example.

When looking up at the surface of a swimming pool from within the water, we see a silver sheen. Some aquatic animals can also be seen to have a silvery sheen in water, indicating that there is air present. This air layer is known as a plastron. Superhydrophobic man-made objects can also have air layers present when immersed in water, again indicated by a silvery sheen. In the following examples, we will look at the effect of these air layers around objects.

Some aquatic animals extract oxygen from water using a layer of air on their body to create a gas-exchange membrane from the water-air interface. Immersed superhydrophobic surfaces naturally have a plastron, leading to the intriguing question of whether humans could ever be able to breathe underwater using a plastron.

Plastrons aren’t only of relevance for oxygen extraction. Acrylic spheres coated in hydrophobic paint (centre) retain a layer of air around them which results in them falling faster than uncoated spheres (left) and coated spheres treated with ethanol to prevent plastron formation (right).

Plastrons can also reduce the friction for water flowing through a pipe. When a flow splits between two pipes, more water will go through the superhydrophobic pipe due to its lower resistance to flow. This is similar to the friction reduction of a hovercraft but without the need for active production of a layer of air.