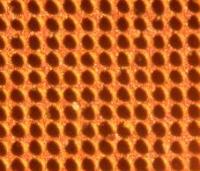 The following are some examples of artificial superhydrophobic surfaces.

Photolithography can be used to create pillars like a ‘bed of nails’ but on a much smaller length scale. These surfaces are useful for comparing observed superhydrophobic effects to theoretical predictions.

Surfaces can be grown in which deposition follows a process called diffusion limited aggregation. When treated with a hydrophobic coating, droplets of water completely ball up and roll off these surfaces.

Abrading / rubbing many superhydrophobic surfaces results in the superhydrophobicity being worn away. However, foams can be made that will renew their water repellency under abrasion.

‘Craters’ can be etched into a Copper surface until they join up to create a landscape of sharp pinnacles.

Grains of sand can be given a hydrophobic coating to create a superhydrophobic surface which water rolls off.

There are two other examples of structures that use similar principles to superhydrophobicity:

If we have a surface consisting of superhydrophobic grains that are loose rather than fixed (as was the case in the example of superhydrophobic sand), the grains can stick to the surface of a water droplet. This creates a ‘liquid marble’ that can roll freely on solid (and water) surfaces.

When water droplets are placed on a very hot surface, they can remain as droplets for some considerable time because a layer of vapour between the droplet and the surface insulates the droplet from the hot surface. This is known as the Leidenfrost effect, as we discussed here. Here, we show some videos illustrating involving the Leidenfrost effect.