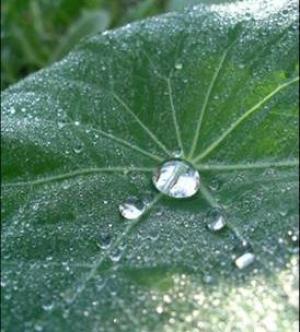 The most water-repellant surfaces that can be made chemically are called hydrophobic surfaces. Hydrophobic means “water-fearing”. The level of hydrophobicity is determined by the contact angle made between a liquid-vapour surface and a solid surface. This is denoted as ϴY in the image below.

One of the most hydrophobic surfaces in everyday use is Teflon. In the kitchen, we can see that a droplet of water will roll around a Teflon-coated frying pan. Teflon has a contact angle of around 105°. However, many plants and animals have evolved to have surfaces with much higher contact angles, as seen below in the image of water droplets on a nasturtium leaf. Water drops on these surfaces are much more “balled up”, which means they roll off much more easily.

Surfaces with a contact angle greater than 150° are called superhydrophobic surfaces, as long as the difference in advancing and receding contact angles of a moving droplet (called contact angle hysteresis) is small.

In the case of plants, superhydrophobic surfaces can be created through the deposition of wax towers such as on cabbage leaves or via hairs such as on the leaves of Lady’s Mantle. For animals, it can be through the use of superhydrophobic structures. This could be the “coat” which allows a water boatman to pass through the surface of a pond without getting trapped by surface tension, or the scale structure of a butterfly‘s wing that stops them getting waterlogged in rain.

A droplet of water on a superhydrophobic surface will roll around and off the surface. As it rolls, dust sticks to the droplet and so the surface not only keeps itself dry, but it self-cleans when it rains, just as on a lotus leaf.

Learning from a “bed of nails”

We can understand the basic ideas behind many superhydrophobic surfaces (both in nature and artificial) by considering a “bed of nails”. If we push a balloon against a single nail, the nail penetrates the skin of the balloon and it pops easily. However, if we have a bed containing many closely-spaced nails, we can push a balloon quite hard against the nails and it doesn’t pop. This is because pushing against many points spreads the force and reduces pressure.

For the same reason, a person can lie on a bed of nails (known as a Fakir’s carpet). As long as the nails are close enough together, it is possible to lie on the sharp points without being impaled. This is a well-known circus act, but has also been seen in University lectures as in the video clip below.

If the features on a surface (the ‘nails’) are made water-repellent, the ‘skin effect’ of a water droplet caused by surface tension can’t be penetrated and the water remains as a suspended droplet. This is just like the “bed of nails” in the demonstration which didn’t penetrate the balloon or the human skin.

If the water drop can sit on the tops of the “nails”, the contact angle will be high and the droplet will move very easily when the surface is tilted. This is known as a Cassie-Baxter state. If the water droplet penetrates into the gaps between the nails, the contact angle is reduced and the droplet loses its mobility. This is known as a Wenzel state.

The ideal superhydrophobic state is that in which the “nails” become infinitely thin and the water droplet rests on a layer of vapour. This can be seen by sprinkling a few drops of water onto the surface of a hot Teflon-coated frying pan. Water droplets are fairly short-lived unless the temperature of the frying pan is around 150°. At these temperatures, the lifetime increases dramatically. At this point, the water droplet remains a droplet because a layer of water at the solid-water interface instantly vapourises when the droplet touches the pan. The cushion of vapour which is formed insulates the rest of the drop from the pan and prevents it evaporating. This is known as the Leidenfrost effect. The lifetime of the droplets gradually reduces as the temperature is increased further.

The water droplet remains a droplet on a “bed of nails” and doesn’t spread out into a film because of surface tension. Surface tension lets insects such as water striders walk across a water surface without becoming submerged. It even lets us “float” a paperclip on the surface of a beaker of water, as in the video below.