Electric fields can been used to force a droplet to spread on a surface via an applied voltage using electrowetting or dielectrowetting. Electrowetting manipulates the ions in a conducting liquid droplet at the solid-liquid interface and stores capacitive energy by the polarization of a solid dielectric layer, whereas dielectrowetting manipulates dipoles in a dielectric liquid droplet at the solid-liquid interface to store capacitive energy by polarizing a liquid dielectric layer. We have shown that dielectrowetting on a SLIP surface allows a droplet to be smoothly and reversibly spread into a film or droplet with different curvature by application of a suitable voltage, as can be seen in the figure below. Because the spreading is reversible, it means that the droplet can be used as a variable-focus lens.

Completely reversible wetting of a droplet of glycerol on a SLIP surface.

Use of a SLIP surface is essential for achieving complete and reversible spreading in air. Dielectrowetting can be used to induce complete spreading to a film state, but when used in air, removing the voltage doesn’t result in recovery of the same shape as the original droplet. This is illustrated in the figure below, which shows spreading of a droplet of glycerol on a hydrophobic surface. We can see that the final state of the droplet is not as tall as the original droplet, showing that the effect is not fully reversible.

Non-reversible wetting of a droplet of glycerol on a hydrophobic surface.

It is interesting to compare the behaviour under dielectrowetting with that under electrowetting. With electrowetting, a glycerol droplet will not completely spread into a film on either a hydrophobic or a SLIP surface, as can be seen in the figure below. On both surfaces, the contact angle of the droplet decreases to a minimum of around 70° to 75° as the voltage is increased, but will not reduce further. 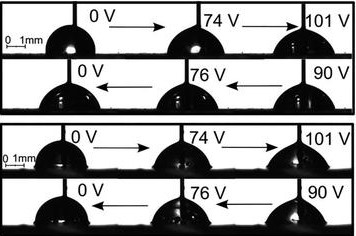 Droplet of glycerol under electrowetting of a hydrophobic surface (top) and SLIP surface (bottom).