We have already seen that the Leidenfrost effect allows droplets to move easily on a layer of vapour above a very hot substrate. However, there is no control over where the droplets move or how fast they move. Droplets can be propelled in linear motion by texturing the substrate in a ratchet (sawtooth) pattern, as can be seen in the video here. Other patterns, such as herringbones, can also be used and can be combined into paths with quite complex shapes, such as in the video here. However, this approach is not compatible with planar microfabrication techniques used for the electronics in droplet-based digital microfluidics.

Our alternative approach to create Leidenfrost levitation is to deposit patterns of thin metal films in serpentine shapes. When a voltage is applied to a groups of these shapes, they act as heaters. These can be selectively switched on and off. This provides programmable control of Leidenfrost levitation selectively in different locations at different times, as shown in [1] below. This selective Joule heating of the electrodes also significantly reduces the energy needed to levitate a droplet.

By making the groups of shapes in a herringbone pattern, we can propel droplets and control where and how they move by creating temperature profiles that drive the flow of vapour. This allows us to achieve droplet motion in a defined direction with velocities of around 30 mm s-1 without having to texture the substrate. This approach has the potential to be integrated into applications such as digital microfluidics. 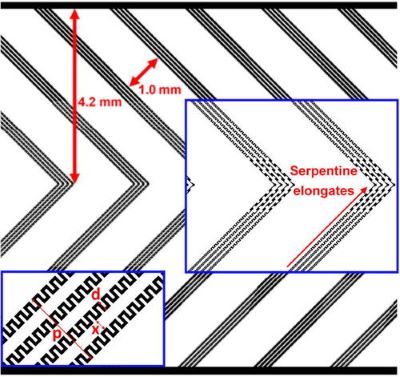 Substrate with electrodes deposited in a herringbone pattern with added serpentine features.

Although a herringbone pattern can propel droplets along the substrate, it gives poor control over the track taken by the droplets unless channels / walls are used. To overcome this problem, we add elongated serpentine patterns near the centre of the herringbone pattern, as shown in the image above. This changes the current density such that droplet motion will inherently self-centre. The effect of the addition of the serpentine patterns can be seen in the image below, where panel (a) shows motion on a plain herringbone design and panel (b) shows motion on a self-centering design with added serpentine features. 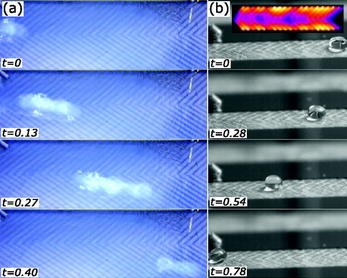 The video below also shows the motion of a droplet on the surface with serpentine structuring.

The video below further shows that the motion is very different on a herringbone design without the serpentine features.

The two videos above are from the supplementary information to the publication below.