We have seen here that we can create electric field patterns in geometric shapes that allow us to create novel liquid shapes. We can see further interesting effects by defining field patterns with complex topologies. In particular, we have studied the dewetting of liquids placed in an electric field that defines a toroidal film. This is different to the cases we looked at previously because of the hole in the middle of the toroidal film. A torus is an example of a shape which is not simply connected, meaning that paths through the shape can’t all be contracted to a point.

Liquid that has been pulled out into a toroidal film will initially keep its toroidal shape during dewetting after the voltage is removed. However, the toroidal shape proves to be unstable. What happens next depends upon the volume of liquid deposited. One example is shown below. Here, we can see that the liquid ends up mostly deposited in the four corners of a square shape, with some smaller deposits in between. We define this to be a state with a number of nodes n = 4.

In general, the number of nodes in the final state reached after becoming unstable depends on the volume of fluid deposited and the aspect ratio of the toroidal film, which we define to be the ratio of the mean radius of the film divided by the mean width:

The image below illustrates the time evolution of the dewetting of different toroidal films, with the number of nodes increasing from 0 to 7 as the volume in the film decreases. This is an example of the Rayleigh-Plateau (R-P) instability. Our technique allows us to select the breakup pathway and final state arising from the instability. 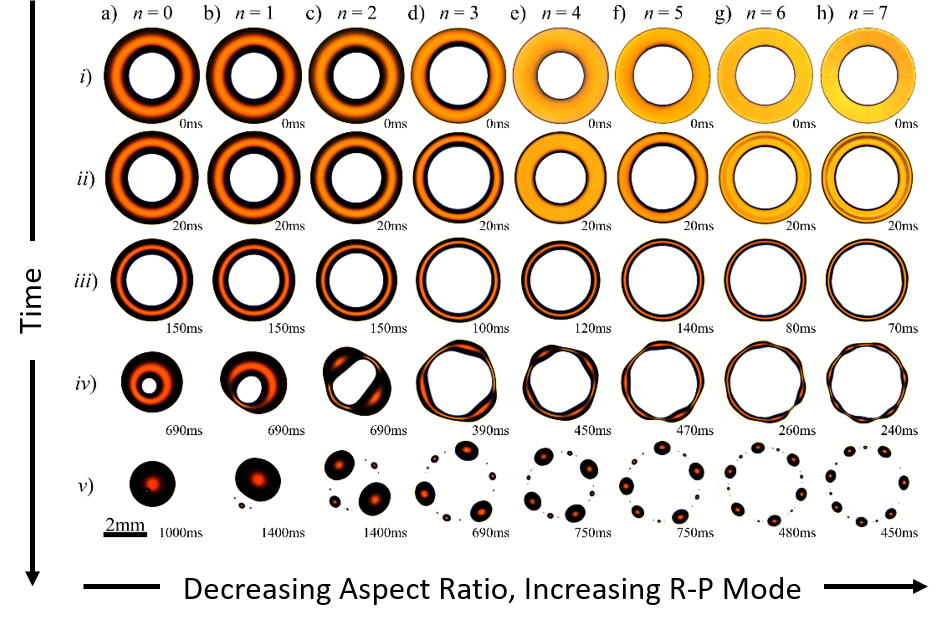